D-backs in the All-Star Game: an Historical Perspective Ziegler’s Extremely High Value, and Why He Shouldn’t Be Traded

You’ve probably already noticed this, but I’ll just throw it out there: the Diamondbacks aren’t hitting the ball hard. Sure, Paul Goldschmidt and some of his friends get into one from time to time, but comparatively across the league, Arizona is struggling to make hard, meaningful contact at the plate. Losing A.J. Pollock and Mark Trumbo doesn’t help the cause but the issue is deeper than a couple of injuries. This offensive unit just lacks consistent punch, period.

Last week, Mark Simon of ESPN Stats and Info dropped this graphic to the masses via twitter. I’ll let you peruse it, then we’ll discuss. 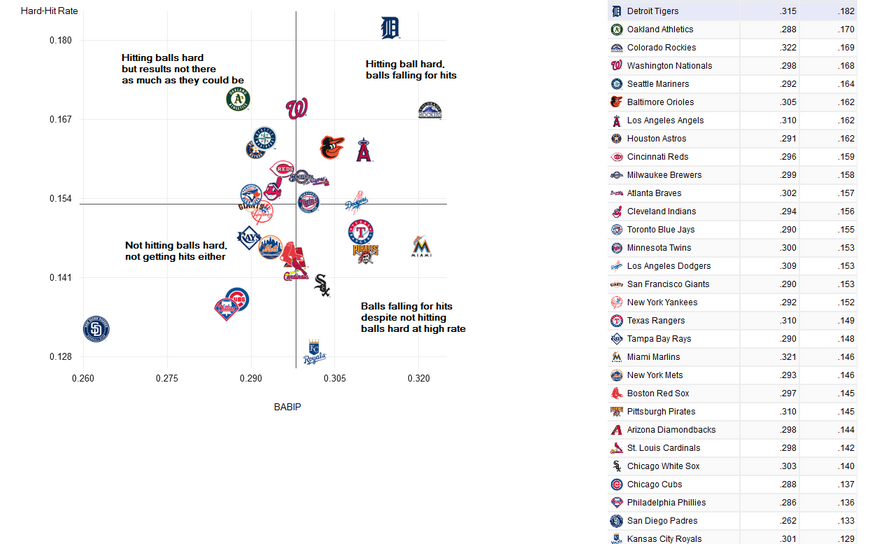 What have here is a graph and table of hard-hit data for the entire league. It’s broken down by team and it’s still pretty meaningful. The Diamondbacks are hard to notice but are located directly on the y-axis with a league average BABIP. They’re below average in hard-hit rate, however, which makes their BABIP almost surprisingly high, which may have something to do with playing half their games at Chase. The table to the right of the graph breaks down the BABIP and hard-hit rate of every team. The D-backs are languishing seven spots from the bottom. Being in the bottom third of the league in this category is not encouraging.

If you’re new to the concept of hard-hit data, let me explain. It tracks the rate at which players, and when aggregated, teams, hit the ball “hard.” The definition of “hard” is pretty fuzzy simply because it can be calculated in a few different ways. Major league teams started tracking this information back in 2009 via a system called HITf/x. While PITCHf/x records all pitch data and is freely available and carried at sites like FanGraphs and Brooks Baseball, HITf/x was never made public. HITf/x measures things like the speed the ball leaves the bat, launch angle and spin on the baseball after contact is made. Again, teams have access to this data but we don’t. The other way of measuring “hard” is much more subjective: the human cataloguing of balls put in play. Although not 100% verified, my guess is that ESPN’s hard-hit data is collected in this manner by being manually logged.

Why should you care about hard-hit data? Because, as a baseball fan, you likely acknowledge the value in a hard-hit baseball. Balls hit on the screws go for hits more often, they leave the yard more often and they are more valuable to a major league offense. Take a look at the leaderboard of hard-hit rate. We see most of the better offenses in the league hitting the ball hard. There’s a strong correlation between hard-hit rate and other offensive measurements, like wOBA or wRC+. Simply put, teams that hit the ball hard most frequently tend to score a lot of runs. Those that don’t, well, they scuffle and we’ve seen plenty of that lately.

It’s also about trusting the process. Rather than measuring success by home runs, for example, a team would likely be better off to build a lineup full of guys who hit the ball hard. Not every home run is crushed and building a team around hitting the ball hard with great frequency would appear to be more sustainable than relying on the ball leaving the yard. I like homers as much as the next guy, but home runs are an expensive commodity on the open market. When evaluating which players to add to the team, there are likely some undervalued assets out there who hit the ball hard and, perhaps, don’t have the homers to show for it. Still, they would appear to be sustainable, valuable commodities. Sometimes the difference between a home run and a fly out is a matter of feet or even a slight breeze. Balls that are hard-hit are likely less susceptible to the fluctuations that buying home runs alone are prone to. Being a middle of the road team in long balls would presumably be fine if you were leading the league in doubles, for example.

It’s safe to assume that the Diamondbacks have this data. They should, because it sounds like every team in the league has HITf/x, and if they didn’t for some reason, they would at least have access to the data that ESPN generates. Hard-hit data should be part of Arizona’s evaluation of internal and external options. As Ryan broke down for us last week, guys like Ender Inciarte, Gerardo Parra, Cody Ross and even Martin Prado struggle in this department and they’re likely dragging down the work of Goldy, Miguel Montero and Aaron Hill. This is part of why David Peralta has been such a revelation: he’s making a lot of good, hard contact. Should the Diamondbacks be in the market for offensive upgrades this winter, it will be interesting to see if they go the same route they did with Trumbo and look to buy outcomes (HRs, RBIs, etc) or the process (hard-hit). I’d argue that they’d be better off going with the sustainable process rather than the outcome, because the traditional prices associated with those outcomes make life difficult for mid-market teams.

Keeps your eyes peeled for hard-hit balls and those hitting them with high frequency. While Inside the ‘Zona has access to this information through our partnership with ESPN, it is not readily available to the public. We will continue to monitor it, however, pass along the goods to you.