Randall Delgado Poised to Excel as Swingman, So Long As He Quits Throwing Sinkers

With innings under his belt, Randall Delgado has a career ERA of 4.23 as a starter, and 4.34 as a reliever. It’s not a ton of relief innings — just 66.1, compared to 257.1 as a starter — but it’s not like the results tell us that he’s been a significantly better reliever than starter so far in his career.

Nonetheless, as Jeff wrote last week, the D-backs will be counting on Delgado in a big way this season: the starting rotation is in line to throw a particularly low number of innings per start, and that’s likely to demand multi-inning outings frequently from not just Delgado but two other relievers. If Delgado is taking most of the weight of that load, what can we expect?

Last season, Delgado entered with an ugly-looking ZiPS projection but with a promising-looking career ERA of 4.09 in 244 innings.

It’s remarkable how close the ERA projection was to where he ended up — underscoring the point that pre-season projections are more indicative of likely results than any early-season sample. But take a gander at that ridiculous K/9 that Delgado achieved while pitching out of the bullpen — that’s unbelievably good for a reliever that pitched mostly in multi-inning stints.April did not go so well. Had the staff been otherwise doing all right, Delgado may have been given more rope — but he and Trevor Cahill were removed from the rotation at that point (Delgado started two other games late in the season).

The subject of Delgado’s turnaround in the bullpen was tackled by RG last year, who picked up on the change in early June. As he noted, though, we should have expected some improvement:

This problem has been examined before. Noted baseball statistician Tom Tango examined all pitchers who pitched as both starters and relievers. On average, when a starter converts to a reliever, their BABIP should be 17 points lower, HR% should be 14.53% lower, and K% should be 17% higher. Relief pitchers are also supposed to give up about one less run per nine innings. Although starters walked slightly fewer less batters than relievers, Tom Tango insisted that “Walk rate is FLAT.”

As people who follow the game, I think there are two things we expect of a pitcher when he moves from the rotation to the bullpen: maybe a tick up in velocity, and less reliance on a third or fourth pitch. On the velocity front, there was a small change; in 2013 as a starter, Delgado averaged 93.4 mph on his four-seam, per Brooks Baseball. In 2014, that ticked up to 94.3 mph, a significant difference — although he stayed pretty constant while changing roles last year: 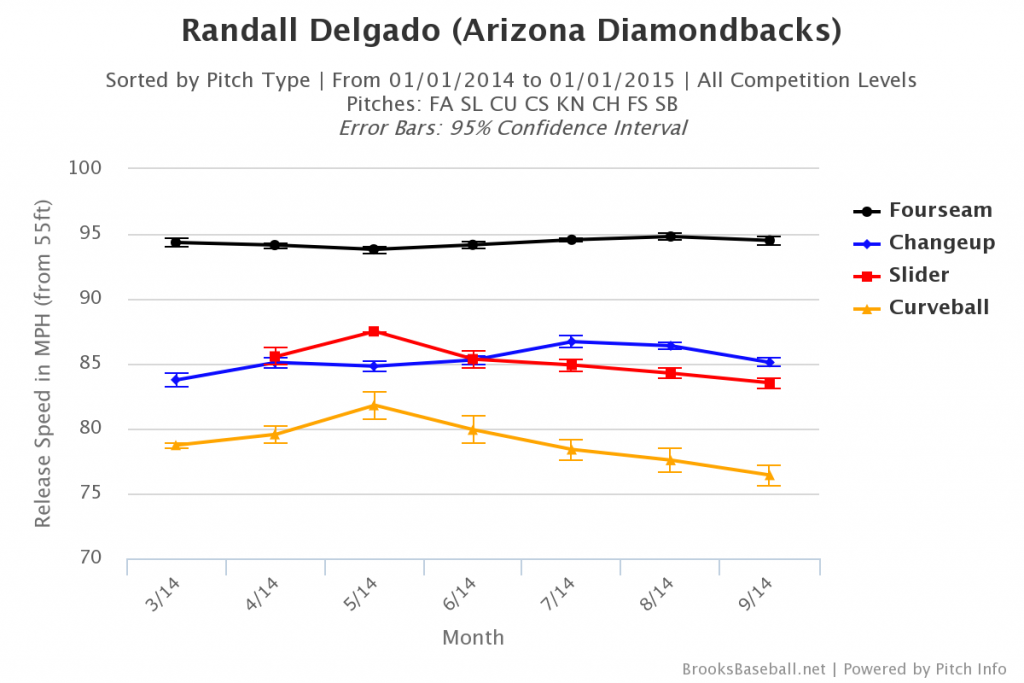 We also saw that other type of change from Delgado: dropping a pitch. Delgado’s principal pitch as a starter in 2013 was his sinker, which he threw a whopping 54.08% of the time. I hid the sinker in the graph above to help make this point (sorry!) but in 2014, Delgado almost completely abandoned the sinker when he was pitching out of the pen. From over 50% of the time, to under 5% of the time.

Remember how Delgado started two games in April, and then started two more games in September? Watch the grey line here, for sinkers: 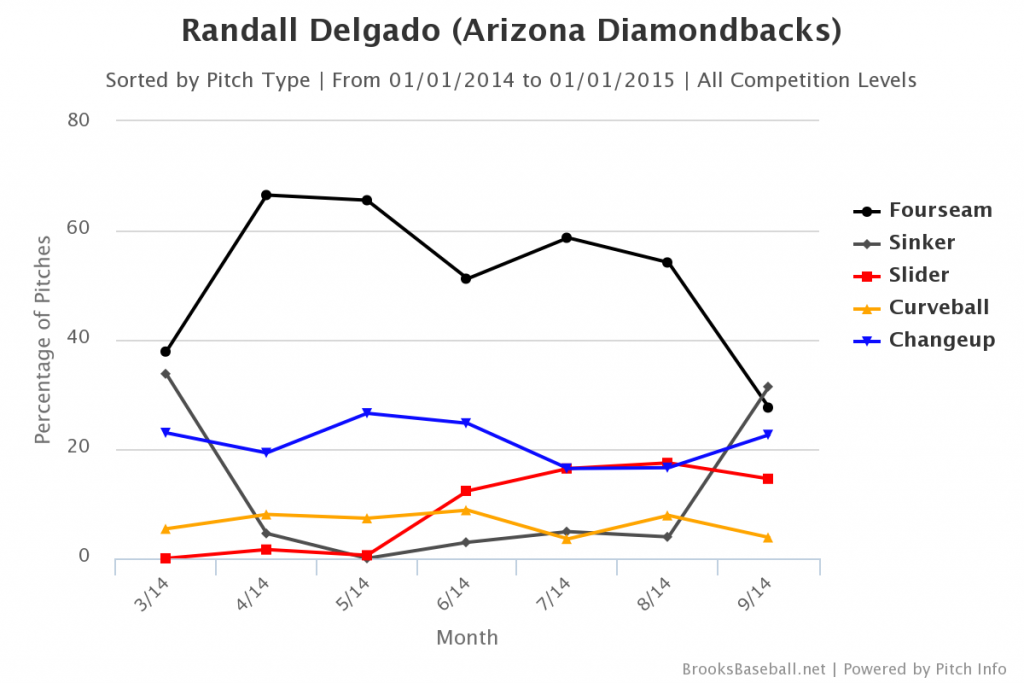 The Brooks Baseball stats include spring training games whenever game is played in a PITCHf/x stadium, and in March 2014, Delgado was working as a starter in preparation for the season. In his first start of the season on April 4 of last year — a 4-inning, 6-ER affair — Delgado threw 13 sinkers in 99 pitches. In his second, more abbreviated (73 pitch) start, he threw just one. After transitioning to a bullpen role, Delgado threw essentially zero sinkers, later working them in a bit in relief and finally bringing them back in force in September (40 sinkers among his 141 pitches in those two starts).

But, a Delgado in relief is a sinker-less Delgado, or very near to sinker-less. Or that’s what we thought. We will have to keep an eye on this; Delgado was throwing sinkers again in spring training despite no official bid for the rotation, and in his first 18-pitch appearance this year, we saw 5 sinkers. That’s kind of a surprise; although Delgado has (not surprisingly) had a good record of getting ground balls with the pitch, that was a lot less true in 2014, and the sinker has always gotten hit hard. Here’s Delgado’s slugging against, year by year, for each of his pitches:

Compare that with his pitch frequencies in the same time frame:

When Delgado threw the sinker about a third of the time, it was excellent as far as slugging against is concerned. When he made it his bread-and-butter pitch with Arizona in 2013, it got hit a lot harder — I really wonder why he got away from throwing that and the four-seam about equally.

Last year, opponents hit like Paul Goldschmidt against his sinker (although there were many fewer), at least when he (infrequently) threw it. It’s shocking how poorly it performed compared with his other pitches. This is the pitch you lose.

Changing pitch frequencies means changing pitch success. Just as throwing the sinker more in 2013 meant it got hit harder, there’s a good reason to think the other pitches might get hit harder if he abandons the sinker entirely. Take one number out, and the other numbers change. That’s what we explored with respect to Chase Anderson and his changeup last year. When one pitch is a clear outlier, however, whether positive or negative, it’s probably time to tinker with frequency.

But this is about Delgado As Long Reliever, not about Delgado As Starter. And last year, Delgado demonstrated to himself, his team and the world (and us!) that he can get by in that role throwing a four-seam as his only fastball. A slugging against of .386 is extremely good for any fastball. So just keep on throwing it.

The D-backs need Delgado to successfully soak up innings, and if he’s able to be successful in those innings, all the better. Since they may be looking to him to get long outings, it would be only natural to coach him to throw sinkers, since for most pitchers they lead to ground balls and quicker outs. That would be a mistake with Delgado. In terms of number of pitches thrown, an increased number of plate appearances beats quicker plate appearances all day long — and Delgado wasn’t getting many ground ball outs with the sinker anyway. Delgado can be this bullpen keystone, the part that makes the plan for all of the other moving parts on the pitching staff actually work. He can do it — but his chances are so much better if he never throws a sinker ever again.

3 Responses to Randall Delgado Poised to Excel as Swingman, So Long As He Quits Throwing Sinkers