Double Plus: D-backs Calibrating Their Reliance on Sinkers

Not long ago, we worked through some research that betrayed a general principle: the more horizontal the movement on a pitch, the more susceptible to large platoon splits it was likely to be. The converse — that when the movement of a pitch was more or mostly horizontal, the bigger the platoon splits — clashed with the D-backs’ sinker experiments in 2015, which were mostly unsuccessful. Just as “ground balls” appears to explain most of the D-backs’ pitching decisions in the last year, it looked like many D-backs storylines about pitchers underwhelming in 2015 could be explained by this platoon split phenomenon.

The two pitchers that seemed most negatively affected by throwing more sinkers to opposite-handed hitters were Rubby De La Rosa (which was especially bad) and the now-departed Chase Anderson, who saw lefties tee up on the pitch to the tune of a .424 batting average and a whopping .697 slugging percentage. But if the general principle holds, it’s something to keep an eye out for with maybe all pitchers — we noted this time last year that Randall Delgado, in particular, should stay away from the pitch despite using it as his principal fastball in 2013 (then, he threw it for 54% of all pitches, finishing with a 4.99 FIP in 20 games, including 19 starts).

The D-backs’ emphasis on sinkers isn’t going away, because their emphasis on ground balls isn’t going away. Heck, you could even read the team’s trade of Anderson (just one of the 5th starter candidates, but one with a high fly ball percentage that couldn’t be changed) for Tyler Wagner (a high-groundball swingman who would essentially take Anderson’s place) and Jean Segura (a good defense option at short, limiting the team’s reliance on Nick Ahmed) as a kind of triple confirmation that the plan is still in place. But has the team backed off on sinkers?

PITCHf/x is installed in only some of the Arizona teams’ spring facilities, and several D-backs pitchers who will probably be on the Opening Day staff have thrown some of their innings while pitching to minor leaguers. Still, we’re just looking for some percentages here, yeah? 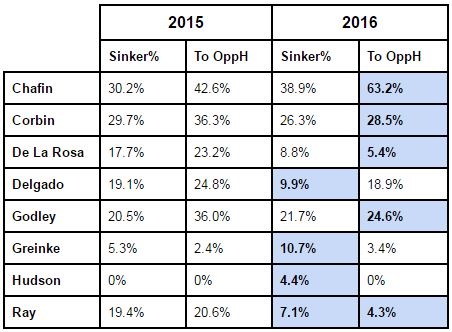 Heyo! The biggest takeaway is that most pitchers have been throwing sinkers to opposite-handed hitters a fair bit less often this spring. Patrick Corbin, Rubby De La Rosa, and Robbie Ray have all seen their sinker usage reduced, especially against opposite-handed hitters, which seems like a great idea. Randall Delgado has been using his less often, but with far fewer tracked innings, that’s less likely to mean something — and you could say the same thing with Zack Godley, who appears to be throwing his sinker more to right-handed hitters, but significantly less to lefties, which is a big step in a good direction. It also looks like maybe someone has whispered in Zack Greinke‘s ear that more ground balls would be nice, even if he’s held the line against lefties. Meanwhile, Daniel Hudson supposedly threw 2 (yes, two) sinkers after throwing none last year, so let’s see if that’s just a couple of misclassified balls once we get more data.

The first one you might have looked for was RDLR’s usage this spring — and by gum, there’s a very big change! Not only is his sinker usage down overall, but it looks like he’s finally throwing it even less often against lefties than he is overall. This could be a huge difference, although RDLR is probably going to be prone to significant platoon splits generally, since his particular fourseam is especially susceptible to platoon splits, from the Max Marchi research we looked at earlier this year — and his slider isn’t too far behind. Lost in RDLR’s struggles against lefties has sometimes been the point that he’s really been good against righties. The sinker was a big part of that effectiveness last year — it’d be a shame, sort of, if he didn’t continue to use it as a big part of his attack against RHH. But this is enormous progress, I think, and among the pitchers in the table above, RDLR happens to have had a fair number of tracked pitches this spring. Something to watch.

Meanwhile, Andrew Chafin seems to have doubled down on throwing sinkers this spring, especially to right-handed hitters. The Marchi research we were looking at was based only on right-handed pitchers, and it’s not necessarily the case that the same phenomenon affects lefties the same ways. Our sample for Chafin pitches also happens to be really, really small (that 63.2% to righties is actually only 12 pitches), so this could just be noise. As it happens, it’s the only Chafin pitch on which a righty got a hit off of Chafin, at least in his tracked appearances. It was also true last year that righties had kind of a field day against Chafin’s fourseam (.388 AVG, .571 SLG) and had fits when facing Chafin’s sinker (.164 AVG, .192 SLG), so it’s probably a smart idea to see how far he can take that before the pitches start to even out. Why not?

This is going to be fun to follow this year, in general, but if you were looking for reasons to believe in improvements this year, look no farther. As far as we can see, so far, the D-backs have made some calculated changes in their pitchers’ usage of sinkers, after a year’s worth of experimentation in 2015. That’s why you experiment — to try to disprove a hypothesis. It sure looked like the D-backs did that last season, and this spring, it looks like they’re ready to test a new one.

2 Responses to Double Plus: D-backs Calibrating Their Reliance on Sinkers