You know, the idea of this website is to write about the things that are knowable and observable that sometimes go overlooked. At least, that’s generally the idea. I don’t think anyone who watched a bulk of Diamondbacks games in 2015 would have overlooked how good the team was defensively. It was readily apparent. Every night. And once Trumbo was out of the way and Tomas was riding the pine, you’d have to be practically blind to not notice.

But just how good were they? That’s complicated because different defensive metrics measure different things. There’s range, there’s throwing arms, there’s runs saved and a even errors. Yeah, I said errors and I’ll explain why later. And you’re getting the idea here – defense is hard to evaluate because there are a lot of moving parts that all get wrapped up in “defense.” Just like offense is composed of OBP, power, average, swing rates, contact rates and more, defense is a simple term for a complicated, larger subject.

The good news is that the Diamondbacks were good at just about everything. If you look around the diamond and the outfield, there were good defenders all over the place as FanGraphs’ August Fagerstrom accidentally highlighted (and I properly pointed out in the comments) when doling out gold gloves in the NL. With his methodology, Paul Goldschmidt, A.J. Pollock, Jake Lamb, Ender Inciarte and Nick Ahmed all finished in the top three at their position in defense in 2015. That’s five of the eight position players on the field.

Before we dive into the individuals who made up this unit, though, let’s just enjoy looking at where the team finished throughout the National League in a number of key categories.

That’s the quick and dirty, more or less. The team led baseball in defensive runs saved, a stat that’s widely accepted and pretty self-explanatory. By ultimate zone rating, they were also near the head of the pack, coming in second. UZR is a sort of catch-all for defense that has its detractors. Range was a big factor in this as were double plays turned (thanks, Brad Ziegler). The low ranking for the outfield arms might be due in part to base runners just not running on Ender Inciarte and David Peralta. The catching situation allowed a lot of steals, unsurprisingly. They made the fourth fewest errors, and could have maybe made less if they didn’t get to so many difficult balls (see: range runs above average), resulting in some eventual misplays. You want some errors, as long as they’re the right kind (an infielder making impossible looking plays resulting in a bad throw or two, for example).

Those rankings above are impressively solid and they’re a team effort. A little bit here and little bit there adds up when you spread it out across the field. One might wonder just what the team ERA would look like with a merely average defense behind the pitcher, but then one might begin to wonder all sorts of things that aren’t fit for wondering and will really just ruin one’s day. The defense was an asset, and whether that’s a priority for Chip Hale or just the result of the guys on the roster he inherited, it surely helped the team compete when they wouldn’t have in some cases. Using FanGraphs’ DEF metric, a catch-all for defense, the team won an extra two games thanks to their glove work. That might not sound like a lot, but in a different, perhaps imminent situation, those two games could result in a postseason bid or being stuck at home listening to Joe Buck and Harold Reynolds on television. When you weigh those options, defense should feel really, really important.

But the defensive performances weren’t evenly distributed – some guys clearly stood out more than others. So let’s look player-by-player to see how this complete picture comes into focus. For the non-catchers, we’ll look at DRS, UZR/150, Range Runs Above Average and Arm Runs Above Average. We’ll get to the catchers in a minute. 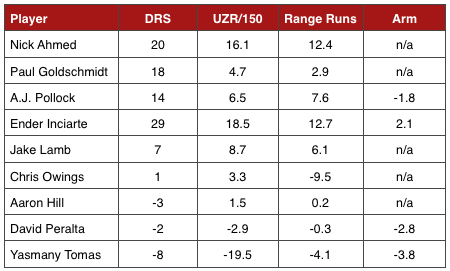 Right off the bat, Nick Ahmed and Ender Inciarte appear elite. Both were second in the majors at their respective positions when it comes to DRS and in the top five in UZR/150. Ahmed was tops among shortstops in range and Inciarte was 5th among outfielders. These guys rock, plain and simple

First base isn’t the same beast as it’s not as demanding of a position, but Paul Goldschmidt was first in DRS, sixth in UZR/150 and fourth in range. He’s at the top of heap for first baseman, no question about it.

Center field is A.J. Pollock’s position for at least the next three years. He was fourth among CF’s in DRS and ninth in UZR/150. He ranked seventh in range but 19th in arm as that’s his weakest tool. Oh well, he’s still among the best out there.

Jake Lamb’s numbers aren’t impressive when you look at totals – he was eighth in DRS. But remember, he was sidelined for nearly a third of the season, then didn’t start all the time in a platoon situation. Looking at UZR/150, which controls for this, he jumps to third among third baseman with at least 250 plate appearances. He’s not quite “elite,” but Lamb’s still very good.

Chris Owings and Aaron Hill split time between multiple positions and the table reflects their total contributions. And “contributions” might be too kind a word as they hovered right around average or just below. In Owings’ case, he was poor at second but just above average at short, likely due in large part to the positional adjustments associated with each position. Conversely, Hill was average at second and bad at third. That should actually work the other way – he gets a little help for playing third, and the poor scores likely just mean that he was actually really bad there. He’s not a third baseman, that’s the takeaway here.

David Peralta’s scores were a little lower than one might expect, but he’s pretty close to average in left. And he’s not getting any positional help there – left field isn’t valued highly. He’s just fine, but he’s not a magician by any means. Yasmany Tomas* was basically Mark Trumbo-esque in the outfield. Okay, he might have been slightly less bad, but I want to emphasize the word slightly here. Maybe shedding some weight will help him cover a little more ground and another year in the outfield might help him settle in a little (he most of his Spring Training reps at third), but it’ll never be good for him.

A full time catcher should log about 1,000-1,100 innings behind the plate, but no one came close to that amount in 2015. The way we evaluate catchers has changed over the last few years as framing data has shown just how valuable pitch framing is, and the fact that teams are paying a premium for it on the open market backs up the numbers. Unfortunately, all of the D-backs’ catchers, aside from Oscar Hernandez who barely played, rate well below average in this department. Welington Castillo and Jarrod Saltalamacchia are in the bottom ten percent of the league here. Castillo seemed to do a nice enough job blocking pitches in his limited time, but he’s far from elite in that category. Tuffy Gosewisch may end up the back up in 2016 and he’s an upgrade defensively over Castillo. I didn’t include it in the table, but all of these guys were below average in stolen bases allowed.

Plain and simple, the catching situation might be better than it was from an offensive perspective, and that matters, but defensively, Arizona will still pay the price. Considering how many strikes that Castillo gives up rather than saves puts even more stress on his offensive game. It also narrows the gap between him and a guy like Gosewisch. Castillo should be the starter if those are the two options, but the discrepancy might not be as large as it seems when all you look at are batting averages and homers. For the record, acquiring a better defensive catcher is a sneaky way of improving this team.

So let’s put a bow on this thing. When you add it all up, the team had essentially two elite defenders (Inciarte and Ahmed), three really, really good ones (Goldschmidt, Lamb, Pollock), a few of average guys (Owings, Peralta, Gosewisch, Hernandez) and four bad ones (Hill, Castillo, Saltalamacchia, Tomas).  Saltalamacchia may not be back, Hernandez will be in the minors and Hill might just find himself released come next season. If you’re trimming the fat, that’s a good start.

Even with a new starting pitcher and some relief help, they’ll still need all the help they can get in the field to attempt to contend for a playoff bid. Keep this in mind when brainstorming offseason moves (believe me, we are) – they really can’t give an inch when it comes to substituting players. They need this production in the field as much as they need production on the mound or at the plate. A full season of Tomas over Inciarte, for example, could results in two to three fewer wins even if they produced offense equally. Those are wins the D-backs can’t give up on this quest to reach the “plus” part of 162+.

*Tomas’ stats only reflect his time in the outfield***

**Stats via FanGraphs and Baseball Prospectus