As volatile as relievers tend to be in 60-odd inning samples, it’s hard to get very excited about performance over shorter spans. If you want a great debut, you have no farther to look than record holder Brad Ziegler, who set a new standard with 39 consecutive scoreless innings to start his career. If you want greatness from a reliever within a short time, look to Addison Reed, who in 2013 — a few months before his acquisition from the White Sox — earned a save in a record-tying 6 consecutive team games, allowing a grand total of two hits and two walks in that span.

What does it look like, though, to be a dominant reliever in Arizona? Ziegler is unquestionably dominant, but it looks like that mold has been thrown away like a frisbee’d Ziegler Special (maybe we should put that mold back together). If relievers are very volatile, we’d expect bad things near-constantly; if relievers were acquired after doing well elsewhere, chances would be best that they’d do worse. The naked fact is that most relief pitchers are not as good as most starting pitchers, and to the extent relievers have fit a more classic relief mold — good velocity, two pitches, decent K rates, small but manageable control issues — they haven’t seemed to thrive in the desert.

I checked in on the D-backs bullpen generally in mid-August, finding that the staff’s relievers had actually been quite good. Using RE24 — the only statistic I really trust for major league relief performance — it looked like most D-backs relievers had contributed middle-of-the-road performances. The staff, it seemed, was buoyed by a ridiculously effective Ziegler, and performance from Andrew Chafin that bordered on greatness; in more limited time, Josh Collmenter had been in the same club.

After rosters expanded in September, the team seemed to relax its approach to the season, trying out Daniel Hudson in consecutive days and mixing in some new blood. At least with respect to the bullpen, September seemed to be an information-gathering month that promised to shed some light on the 2016 relief crew. When I included Silvino Bracho in that mix on September 10, he had pitched in just five games, and had given up an earned run in the previous two. He looked great and the Steamer projection system really liked him at that time, but for some reason, I didn’t really consider that beyond small sample noise; and at any rate, the piece was about learning about pitchers just like him in the time remaining.

By the season’s final weekend, Bracho had proved something: that he was capable of sustaining a high level of performance that September. More than that, he’d shown us who he is as a pitcher. RE24 had shown us that the extreme ground ball percentages tallied by Ziegler (72% GB%) and Chafin (58% GB%) had made them more helpful in winning games than their peripheral statistics would have suggested. Batted ball rates showed that Bracho is also unusual — in the completely opposite direction. Keep in mind, a ground ball percentage of 30-something percent or low 40-something percent is normal; a GB% sustained above 50% is uncommon, if not exactly rare. From an October 1 piece checking in on Bracho:

So even though as of yesterday it was just 11 innings, Silvino Bracho is already becoming interesting. Two earned runs gives him a 1.64 ERA. 16 strikeouts and the filth he’s flinging make him look dangerous. The man’s ground ball percentage: 20%.

There seemed to be evidence that at the extreme high end of fly ball percentage, there was also an advantage to be found. In that piece, it looked a lot like the most extreme fly ball relief pitchers benefited greatly from increased popup rates, and in Bracho’s smallest of MLB samples, he did show that was possible (3 of 16 fly balls were popups). In baseball, maybe, the answer is always “more” if you have some, for anything other than “predictability” or “straightness of pitch path”; bat speed is great, more bat speed is better. Velocity is great, more velocity is better.

In the October 1 piece, before establishing that Bracho had high fly ball rates in the minors, I ran this guy out there: 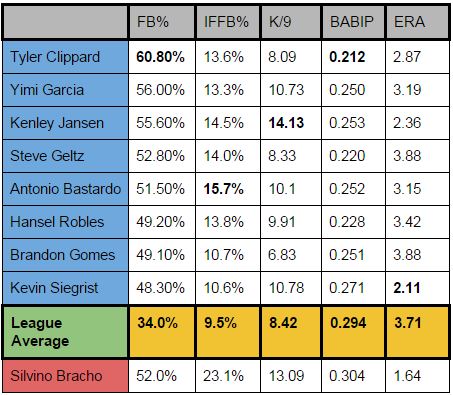 This, I contended, was a collection of the handful of relievers to have fly ball rates high enough to be helpful. I’m throwing it out there now to highlight the middle column of numbers, K/9. With the exception of Brandon Gomes, everyone in blue on that list had a fairly high K/9. On the extreme low end for fly ball rate (the high end for ground ball rate), the vast majority of pitchers have K rates a lot lower: 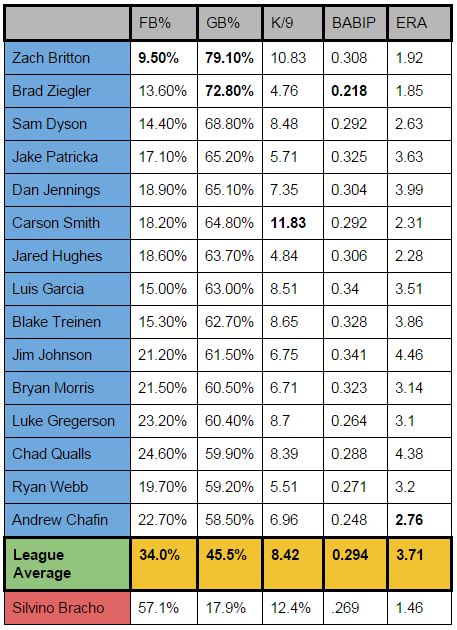 High strikeout rates seem more compatible with extreme FB% relievers than extreme GB% relievers. But still… Bracho is in weirdly unique company among the weirdly unusual. The FB% guys table is just pasted from the piece on October 1, when there were three games left. In the bottom one, I’ve updated Bracho’s numbers — and while the K rate dipped, his BABIP and ERA dipped at least as much. And Bracho increased his fly ball rate!

Kenley Jansen, Zach Britton, Carson Smith. Few combine great strikeout rates with extreme batted ball tendencies, and it looks like Bracho could be one such pitcher. The extreme batted ball tendency lists aren’t filled only with great relievers; some seem to trade BABIP for strikeouts or the other way around (as Jeff has explained, Ziegler has had to pick), and some (I’m looking at you, Jim Johnson) seem to get nothing at all. But Batted Ball Tendency Plus Strikeouts pitchers? For all we know, those guys do always dominate. Or, it looks like that is their profile because they have dominated, and not necessarily because they’re dominant.

This whole post probably had the feel of a “clip episode,” in which the writers of a TV show lazily string together scenes from past episodes. Yeah, that kind of just happened. But it just happened, in large part, because I needed to get back to this point in this piece to bring up the next thing and give it the aura of importance it deserves.

Is Bracho a fun fluke? Or has the Ziegler/Chafin/Collmenter Relief Trio of Domination become a quartet?

Steamer projections for 2016 are now available. Here are some guys who may be in play for some bullpen time with the D-backs next year; some boxes of particular note are in green. 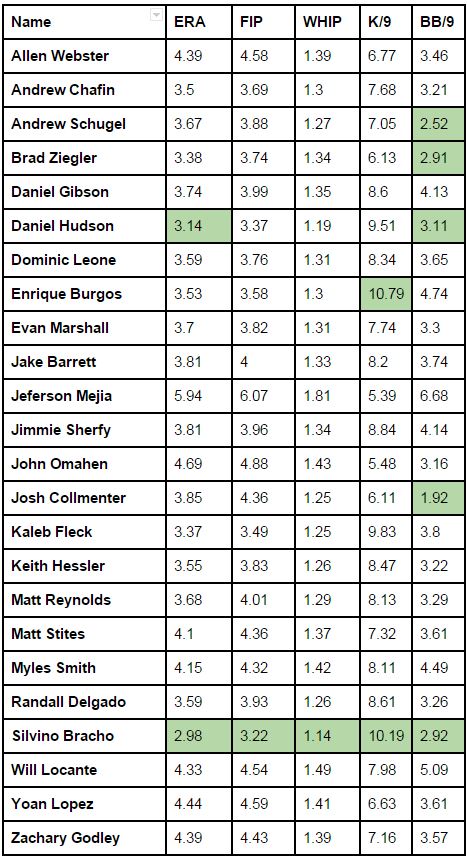 I think we’ve found that Steamer has been reliably high on Ziegler ERAs, etc., and this is the farthest thing from proof that Bracho is the most promising bullpen arm in play for the D-backs next year. Based primarily on minor league numbers, though, it’s time to start acting like Bracho is a default piece of the puzzle. Bracho had a solid debut in Rookie ball in 2012, posting a 9.6 K/9 and outstanding 1.8 BB/9 with a 0.60 ERA in 30 innings.

That was his worst minor league season. Even counting his brief 6 inning stop in High-A, all he’s done at every minor league level is post strikeout rates of 11.9 K/9 or higher; his walk rates have also been elite at every rung, 1.81 BB/9 or better. He’s given up just 8 total home runs in 150.1 total minor league innings. With all that success, how did we not see this coming?

Of course, if you wanted to see stuff like this coming, you could religiously read Jeff Wiser:

Bracho has gone from an off-the-radar prospect to the player with arguably the most helium in the system. It was easy to dismiss some of his past results as a player who was old for his level, but that’s no longer an option. With 71 strikeouts and just 10 walks in 49.2 innings, he’s been simply dominant. It’s the ability to command his stuff that’ so impressive while he continues to generate the whiffs.

It’s the age thing that caused the obscurity. Extremely high strikeout rates (12 K/9 and thereabouts) are not very uncommon in the minors, and there are control artists, too (see: John Omahen, above). But consider this: the fewer the walks, the fewer the baserunners — and the fewer the plate appearances per inning. The combination of elite strikeout rates and elite walk rates that we’ve seen from Bracho are not at all common — they’re extremely rare. There was little reason to think the man would rocket up the ladder like this (his highest and only level in 2014 was Low-A, and he started in 2015 in High-A), but there’s also a very strong foundation for Steamer’s very bullish projection. With very slanted batted ball tendencies, elite K rates, and elite control…

This is going to be fun to watch.

7 Responses to The Silvino Linings Playbook