Remembering Not to Forget Evan Marshall The D-backs Are Better Than This, Right?

Will the Ends Justify the Means?

It’s expensive to own a major league baseball team. If I win Powerball, I’ll probably buy a team and move them to Portland, Oregon and call ’em The Jeffs (but after taxes, shoot, I probably still can’t do it – I’ll start a GoFundMe page for the rest). To own a team, you really need to understand business because the whole thing is wildly complicated. Concessions, salaries, parking, merchandise, arbitration, trades, stadiums and then, oh yeah, the game on the field. If you want a good look at the broader picture, I can’t recommend Jonah Keri’s The Extra 2% enough. You can’t be too weak in any one area or you’ll be taken advantage of, whether it’s through poor signings, lost revenue or, worst of all, being stuck with a losing team. No owner can be expected to know every piece of the puzzle, though, and that’s why they routinely try to surround themselves with smart people they purportedly trust. These GM’s, Assistant GM’s, Chief Baseball Officers, Presidents of Baseball Operations, Scouting Directors and the like come to their positions with a wealth of knowledge. And it’s with the this cumulative brain power that a team is run. The direction in which it’s run, however, may not be such a large, inclusive conversation. The direction is deliberate and is likely dictated by the top few.

Those top few for the Arizona Diamondbacks have elected to try to win right now. Why not? Paul Goldschmidt is an MVP-type player who may end up in the Hall of Fame someday and happens to be in his prime. A.J. Pollock and Patrick Corbin are cost-controlled players that perform at All-Star levels and cost a fraction of the All-Star price. There are some young supports in Jake Lamb, Archie Bradley, David Peralta and others, while some veterans, like Brad Ziegler and Welington Castillo, add stability. The team was missing a few key pieces and they, by and large, have filled those needs with Zack Greinke and Shelby Miller. Signing Howie Kendrick for second base might be a good idea (emphasis on “might”). Adding another strong reliever or a good defensive backup catcher would make some sense. Every roster could use another piece or two, but as it stands right now, the Diamondbacks appear to be in the thick of it when it comes to contending for an NL Playoff spot, along with the Nationals, Mets, Cardinals, Pirates, Giants and Dodgers. The Cubs are way out front.

Arriving at this juncture has been the result of some parts luck and some parts wheeling-and-dealing. It’s that wheeling and dealing that we should really focus on. Even though I’ve thought about it in the past, it was the most recent episode of The Pool Shot that sort of jogged my memory. Since last April, the Diamondbacks have traded or forfeited the following draft picks:

Along the way, they also surrendered three cost-controlled years of Ender Inciarte and a year of Trevor Cahill. The latter isn’t a concern of ours going forward, but Inciarte will likely generate $8-12 million worth of surplus value through his arbitration years, assuming his defense holds up. The team did get Victor Reyes back in the Cahill deal but he finished just outside the Diamondbacks Top 30 Prospects and is likely an up-and-down guy and not a difference maker.

So, with all of that out of the way, I think it’s pertinent to try to assess, financially, just what the team has given up in an attempt to win right now. Luckily, there are some estimates that we can use for the value of draft picks, the most abstract item to price. Although Dave Stewart will tell you that a draft pick is only worth what you sign the drafted player for, that’s far, far from true. The draft and it’s slot limits/bonus pools are designed to artificially suppress the bonuses for amateur draftees. Without the draft, there would simply be open bidding for every eligible player. What do you think the result of that bidding would be? Would Kris Bryant have really signed for $6.7 million? I highly doubt it since it wasn’t unforeseen that he’d be producing like a $30 million player in short order. Even though the slots are in place and guys sign for comparatively small dollar figures, they are worth significantly more to an open market given the players’ eventual production versus their actual salaries (Kris Bryant played for the major league minimum last year and will do so again next year, for example).

The works of Ken Woolums at Beyond the Box Score and Matthew Murphy at The Hardball Times give us some important information. First, as the draft wears on, so do the expected outcomes of players picked. There are always a few misses, but for the most part, the best players go early. Check out the production curve from draft picks 1-500: 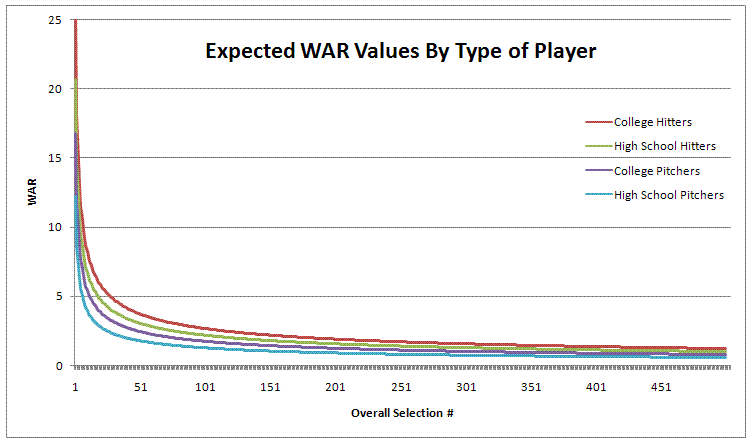 Expected production tapers off so sharply we can barely observe it. For every type of player (see legend), there’s a really, really steep decline after the top ten picks or so. By the end of the first round, we’re looking at far less-steady outcomes, and soon thereafter, it’s really just a formalized passing out of lottery tickets. The takeaway here is the massive disparity between early first-round picks, mid-first round picks and picks from about the third round on.

Through Murphy’s analysis, those picks have dollar values attached given the expected levels of production associated with each. The first overall pick is worth something in the neighborhood of $45-50 million. The 16th-overall choice is valued right around $12 million. A late first-rounder or Comp A pick is near $10 million in value while a Comp B choice should be close to $8 million. We’ve heard a lot of talk that these figures are low, but we don’t know by how much, so let’s stick with them and make a mental note that the actual cost is probably something like 10-15% higher.

Again, that figure is low. Also, we’ve seen who Toussaint, Swanson and Blair are as players. The values above only aim to value the pick itself (or the opportunity to make that pick), not each specific player chosen at that slot. We’re being theoretical here. If we weren’t we could argue Blair is probably worth more since he looks like a rotation fixture, Toussaint is a wild card (therefore the pick value applies pretty well) and Swanson is about what you’d expect at #1 overall as a safe bet to produce. These figures don’t appear to be off by much and are, again, probably low by 10-15% in reality.

Now, it’s not like these trades happened in a vacuum. The Diamondbacks saved $8 million of Bronson Arroyo by trading Toussaint and saved $12.3 million in flipping Cahill. Those numbers need to be subtracted from the $90 million above, and we’re left with a cost of, let’s say, a conservative $70 million. Then we figure that the team lost $10 million of value in Inciarte, which brings us back to $80 million in cost. There’s value in opening up Inciarte, Arroyo and Cahill’s roster spots, but let’s just try to keep this simple for now.

The signing of Zack Greinke cost the team $206 million. Shelby Miller will cost about $5 million in 2016 and is under team control for 2017 and 2018 as well. He could make something like $18 million through his three arbitration years when it’s all said and done, and although there’s no guarantee it’ll be the Diamondbacks paying him for all three of those seasons, I think it’s safe to assume that’s at least the plan right now. So if all of this correct, the D-backs:

Of course this leaves a few things out. Yasmany Tomas now gets a chance to play and, hopefully, grow. The bullpen will be less stressed, in theory, because starters can likely carry more innings. There is some star power at play here, and that does help revenues through ticket sales and merchandise sales. I’m certainly not pretending to cover every aspect of this conglomerate of moves, but I think we can put it all together and comfortably say this was a damn expensive way to get an additional five or six wins on the roster.

Maybe that seems unfair. Maybe you don’t think ditching Trevor Cahill had a lot to do with what’s happened this offseason. I can buy that to a degree, but it did allow them to experiment with some other pitchers that have put them in the position they are now. And what the hell? I still can’t, for the life of me, justify the Bronson Arroyo sale with Touki Toussaint unless it was about freeing up cash for this winter (which, in a way, might have been a big impetus for the Cahill move as well). I see this as all interconnected although, perhaps, the strength of connection may vary some. Still, these are awfully expensive puzzle pieces and an admittedly limited return.

If this all works, if the D-backd reach the NLCS at least once in the next two years, there won’t be much, if any, complaining. The fans will get what they want, the organization can say they took their shot, and Paul Goldschmidt gets to add some nice postseason play to his HOF resume in fifteen years. I really hope it does work because, as the Cardinals of the NFL have shown us, the Arizona fan base can be loud and proud. But if it doesn’t, well, you can see that a lot was spent on a little. And in a world where World Series teams can sometimes come out of the blue, betting on such a small window makes me nervous. We don’t know what the future holds, but we know what it has to hold in order for the ends to justify the means.

10 Responses to Will the Ends Justify the Means?