What the D-backs Can Learn From the Rockies Speaking with Top Draft Picks: Previewing D-backs Short Season Affiliates

Yasmany Are Called But Few Are Chosen: The Time Has Come to Build for 2017, Better Embrace It

In case you haven’t noticed, we here at Inside the ‘Zona have started to buy the idea of the Diamondbacks becoming sellers as things approach the second half. Last Friday, I wrote about where things went wrong this season and about the slim opening left on the window for 2016. On Wednesday, Jeff reached the next link in the chain and looked at the team’s position as a seller, approaching the trade deadline. After a middling 3-3 homestand against two relatively beatable teams, the picture looks like this – 12.5 games out in the division and eight teams ahead of them in the Wild Card race with 42% of the games being played. For all intents and purposes, the chase for the playoff field is very over.

It’s not fun to give up on a season with over 90 games still to be played, but this assumption embraces a false premise. True, a team may not be focusing on winning in the current season, but the choice isn’t simply to try and keep winning or declare the season a failure. The situation must be looked at as a chance to get a head start on formulating and implementing a plan for next season and not as some dead time until the offseason. It’s time for the team to embrace decisions that will position the team for a better run in 2017 – presuming they still believe they are in a contention window, which seems reasonable given the main core of players.

With the goal not being to maximize wins this season, the team can be free to give more playing time to guys whom they may not fully trust in more competitive circumstances, for whatever reasons, #FreeJakeLamb. On top of giving Jake Lamb more chances against lefties, another decision that seems prudent is maximizing the amount of at-bats Yasmany Tomás gets. Despite some recent struggles, Tomás has made some improvements across the board this year, and it seems tough to keep improving while riding the bench.

I can’t say whether Tomás should be in AAA or the majors to try and maximize his development and get his at-bats, but I don’t see how he can advance if he isn’t playing somewhere. This season he has started in 52 of the team’s 68 games, and for a guy with some platoon troubles, no real position, and replacement-level value, that seems reasonable enough. Then again, with A.J. Pollock out and Owings and Peralta trading time on the DL and three outfield spots to fill, it doesn’t seem like the team has to stretch too hard to find playing time for Tomás. 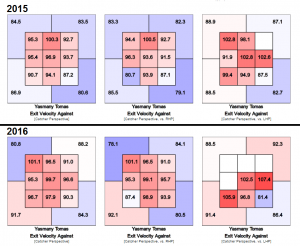 On the whole, he’s been getting better as well. His ISO is up 35 points, his wRC+ is up from 88 to 93, and he’s improved his walk, strikeout, and home run rates. Across the board, he’s developing and perhaps that’s most apparent in his exit velocities. Using the Statcast data, provided over at Baseball Savant, he is hitting the ball harder in nine of the 13 regions in and around the zone (left-side charts). Splitting up his exit velocity against pitchers by their handedness, and the growth is still there against both righties (middle charts) and lefties (right-side charts).

Pivoting over to his plate discipline, Yasmany has been able to show quite a bit of evolution but a modest amount of improvement. He is only swinging at pitches outside of the zone about 0.5% of the time less often according to PITCHf/x, which is essentially statistical noise, however, that same data measured by Baseball Info Solutions suggests his drop is closer to 4%. Looking a little closer at the surface, he has increased his walk rate from 4.0% last season to 7.3% in 2016 while lowering his strikeout rate from 25.8% to 22.7%. These rates tend to stabilize fairly quickly, so it seems fair to say there has been some improvement in the discipline department. 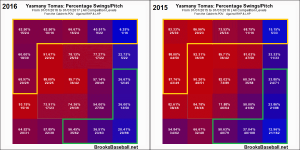 Indeed, he’s shown a great deal of progress on pitches middle-in to up-and-away (highlighted in orange). However, this 18.3% overall drop in that area has been matched by a 3.7% increase in swings on balls middle-down to middle-away (highlighted in green). While this decrease in swings on balls middle-in to up-and-away is certainly a positive adjustment, he just doesn’t see enough balls thrown there to make up for the disproportionate amount of pitches he sees middle-down to middle-away, an area where he is swinging more frequently. Bringing his exit velocities back into the equation and it doesn’t take much to see why Tomás still has so much room to grow if he can lay off of pitches outside the zone – he mashes everything inside it. He’s shown that he can make noticeable changes in his plate discipline, but he now has to put together his improvements he’s made up-and-in with changes down-and-away. Again, these changes won’t come while riding the pine.

It’s not fun to extend the offseason by four months, with no hope of contending returning until March, but that’s where the Diamondbacks are finding themselves. In the next few weeks, reality will have to set in that 2016 simply isn’t going to be the year of the snake. In the months that follow, with games still to be played, finding ways to maximize their chances in 2017 should be the goal. For guys who can stand to impact 2017 like Lamb and Tomás, the goal should be to give them playing time.

One Response to Yasmany Are Called But Few Are Chosen: The Time Has Come to Build for 2017, Better Embrace It