Hot Bats and Predicting the Future

In case you’ve missed it, the Diamondbacks are scoring a lot of runs. Entering Tuesday’s game in Washington D.C., they were third in baseball in runs scored with 141, third in batting average at .269, 10th in isolated slugging at .169, and eighth in home runs with 31. Put all of that together and you get a pretty powerful offensive force. That probably comes as no surprise as Paul Goldschmidt, A.J. Pollock, David Peralta, Jake Lamb and a hot-hitting, at least at home, Yasmany Tomas are capable of doing damage. Even supporting players like Chris Owings and Brandon Drury have been up to the task. The problem is, well, it may not be entirely sustainable.

A while back we discussed the new data available from Statcast, notably sharing that Hit Probability would change the way we think about batted balls. That revolution is starting to showcase new tools, one of which is xwOBA, or Expected Weighted On-Base Average. You’re perhaps familiar with wOBA (weighted on-base average) already, which is a sort of catch-all statistic to describe offense (incorporating things like batting average, on-base percentage and hitting for power). While it’s not league or park adjusted (like wRC+ is), it does a good job of capturing offensive output. xwOBA is very similar, except it uses Statcast’s batted ball data to assign value to batted balls rather than relying on what took place on the field. Henry Druschel explained explained this well recently at Beyond the Box Score.

If wOBA is meant to be add accuracy to OBP or AVG by evaluating batting events with more precision, xwOBA is meant to add accuracy to wOBA in much the same way. Instead of treating all singles as equal, and all home runs as equal, xwOBA uses the new Statcast tracking to assign every batted ball a likelihood of turning into a single, double, triple, home run, or out, and gives credit to the batter based on that probability. Instead of treating a pop up that drops in behind second base and goes for a single as equivalent to a screaming liner that the center fielder just barely cuts off before it reaches the gap and that also goes for a single, xwOBA looks at what usually happens to balls hit at that launch angle and velocity.

This should make intuitive sense. Sometimes a batter makes great contact and gets robbed by a diving catch. wOBA would only give the batter credit for making an out while xwOBA may recognize that the ball goes for a hit 95% of the time and gives the batter the appropriate credit. After all, the batter did his job. It’s only fair to give him credit, even if a fielder made an incredible play.

I bring all of this up because Baseball Savant has a new feature for 2017 as you can now search for xwOBA on their leaderboards. Doing so for the Diamondbacks, something becomes clear very quickly: most of the position players are running higher wOBAs than xwOBAs. In other words, their current offensive performances outweigh what Statcast would expect based on their batted balls. That suggests some semblance of “luck” in the favor D-backs hitters, and with luck, well, we can expect that to even out over time. Have a look for yourself (keep in mind an “average wOBA” is something like .320). 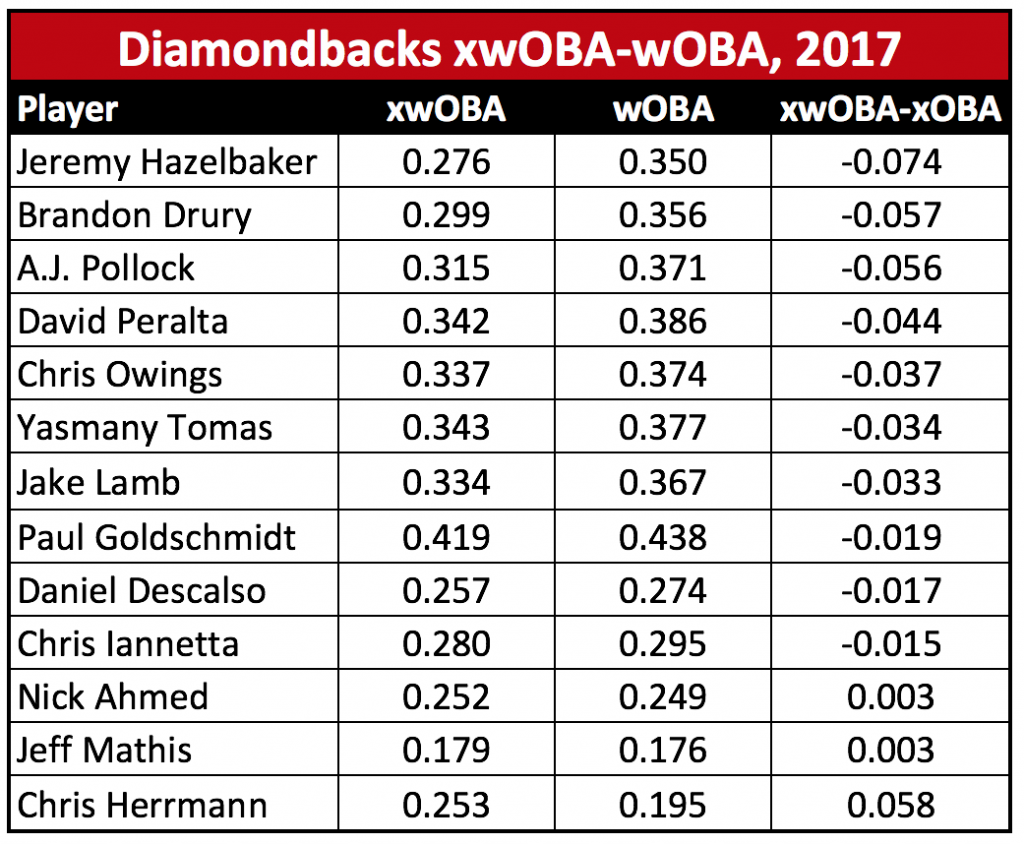 The biggest overachievers thus far have been Brandon Drury, A.J. Pollock, David Peralta, Chris Owings, Yasmany Tomas and Jake Lamb. Their current production levels are well above average, and even their expected production is north of that mark. But based on batted ball data, they’ve performed better than expected. The weakest of bats have had the worst of luck.

Of course, xwOBA wasn’t always around, yet we’ve had a sense of “luck” in the past. Most of that has come in the form of scrutinizing a batter’s BABIP. With the league average hovering around .300, a guy with a BABIP of, say, .350 seemed to be generating some luck in his favor. That said, there are issues with using BABIP this way as we’ve long postulated that hitting the ball hard helps prop up a player’s high BABIP (this is how we identified Jake Lamb when he was back in High-A as a potential GUY). As more batted ball data has come out, this theory has been supported. Still, take a look at the Diamondbacks’ BABIPs.

As a team, they rank second in baseball with a team BABIP of .331 (trailing only the Nationals, the team they’re currently playing). Eight hitters had a BABIP of .345 or better entering Tuesday’s engagement in the nation’s capitol. That would support the notion of good luck for D-backs hitters. But keep in mind, the team played 17 of their first 27 games at home where the ball flies. The humidor is coming, but it’s not in place yet and hitting (and everything else) tends to be hotter in Arizona. So maybe we shouldn’t be so quick to call it a stroke of good luck.

Looking at batted ball data, another piece of information plays to the contrary. The team is fifth in baseball in hard-hit rate at 35%. They’re second to last in soft-hit rate 15.2%. As a whole, the team is making a lot of good contact and not much bad contact. And given that good contact leads to good production, well, maybe we shouldn’t be so surprised. Five D-backs hitters rank in the top 50 in baseball in hard-hit rate among qualified hitters (Goldschmidt, Peralta, Lamb, Pollock and Tomas). That’s good.

So perhaps the Diamondbacks have been a bit lucky, but it’s not as if the production is completely unwarranted. Yes, the on-field production outpaces what should be expected to a degree, but there’s also plenty of information to support a solid showing. The real question becomes what we expect going forward, and for that, there’s little information. xwOBA might be our best forecasting tool and that expects a dip for a number of players, though that dip leaves most players still well above average offensively. It shouldn’t come as a shock if things slow down a bit, and with the humidor on the horizon, we may be in for even more of a decrease in offense (at least that’ll effect both teams on the field). We’ve seen some strong performances so far, and even a few surprising ones, but they likely won’t hold. Fortunately, they likely won’t fall flat either, so the answer, as it often does, likely lies somewhere in the middle.

5 Responses to Hot Bats and Predicting the Future