The promotional offer was good. To move Bronson Arroyo‘s contract, the D-backs sold Touki Toussaint — and yet with Arroyo on the 60-day DL, by rule the Commissioner had to sign off on the trade. Getting another player on a similar timeline in Phil Gosselin made a lot of sense, and kept some eyebrows from raising. While the promotion was ongoing and Gosselin was on the DL, Gosselin didn’t count against the 40 or 25 man roster limits. Gosselin joined the Active Roster a day before rosters expanded, going hitless in his first four plate appearances. Since then, his rate of interest has skyrocketed: he’s gone 7 for 20 with 4 walks, 2 doubles and 2 home runs, good for a .350/.458/.750 line in this most limited of samples. So nice right now — but eventually, the D-backs may have bills to pay.

If borrowing on a credit card is like borrowing from the future, the future in the D-backs’ case could look a lot like Brandon Drury. From the roundup on Friday, where Jeff made sense of all the many D-backs roster moves on and around September 1:

Brandon Drury is in the majors now and it’s nice to see some fresh blood in the middle infield. He’s played second and third, something that was expected when he arrived. His positional flexibility is nice to go along with the fact that he can absolutely hit. The power numbers have been down for him this year, but it appears that he’s traded in some of the power production for more contact and, well, it’s worked. He’s not a huge power guy, but there’s reason to think average power will come for him. For now, he’ll have to jockey with Phil Gosselin, Chris Owings and Jake Lamb for playing time, but that’s okay given that he’s had a full year’s worth of at-bats in the minors this year. With the expanded roster, things are a little crowded and the added exposure for Drury, however much of it there ends up being, will have to come at the expense of other dudes.

Nick Ahmed has been starting about 75% of games, with Owings more frequently moving over in the absence of Cliff Pennington, and Aaron Hill essentially covering Ahmed’s missed time, the occasional Owings day off and way too many starts against lefties in lieu of Jake Lamb at third. A guy you can play at both second and third is a pretty great fit for a club looking to limit Ahmed’s exposure to RHP and Lamb’s exposure to LHP, thanks completely to Owings’s ability to play both short and second, and the D-backs’ willingness to play him at both positions. We love these kind of time shares, 4 players and 3 positions. The outfield has been incredibly productive with each member rested a bit more than would otherwise be typical. The infield can be the very same thing.

An above-average hitter that could play both third and second would be tremendous for the D-backs as they enter next season. The D-backs have four players who could be that, assuming they bring back raking Jamie Romak. But…

I think it’s interesting that all four have some kind of claim on above-average offense, and yet each has a completely different kind of claim. Sticking with their sticks — there’s a fair bit of difference between 74 wRC+ on the low end and 86 wRC+ on the high, but these guys do not appear to be so different from each other that one is head and shoulders above the rest. The 33 year old Hill appears to have reached a bit of a decline phase, although the pinball nature of his career work at the plate might make us at least suspect he’s got another extended hot streak in there. Philip Gosselin will turn 27 years old on the last day of the season, and isn’t a guy you’d assume would get significantly better over time, unlike Drury, who despite his slow burn ascension through the minors just celebrated his 23rd birthday. I know, there’s no reason to conclude that Gosselin can’t improve or that this recent little surge isn’t real, but if you’re willing to go that far, I’m not sure we should be able to rule out Romak and his ridiculous minor league stats this year despite the fact that he will turn 30 a few days before Gosselin turns 27.

For what it’s worth, it looks to me like Gosselin has earned his hits while wearing Sedona Red. He’s hit the ball in play 22 times, but only 16 have batted ball velocity in the data accessible through Baseball Savant. Comparing that breakdown to the team results we got in delving into Lamb’s BABIP success about a month ago, it’s remarkable that although just 6.4% of D-backs’ batted balls had fallen in the 100-104 mph bucket, 4 of Gosselin’s 16 tracked balls (25%) have been in that range. There’s been no special skill showing at getting the ball over 90 mph generally — just 2 of the remaining 12 balls fall into that category — and so his 84.9 mph average exit velocity in this small stretch is still nothing to really write home about. Still, having 2-3 extra hits in those 100+ mph buckets is a difference about the same size as the difference between his actual batting average and the one he was expected to have.

That’s what we’re talking about here: 2-3 extra hits, in a small enough sample to make a sizable difference in his Arizona batting line. That’s not enough to suddenly throw Gosselin ahead of anyone else in this pack. We need tiebreakers. And, thankfully, we have them: there are plenty of factors that play into this.

1. Defense is as important for a part-timer as it is for a full-timer, and it is an excellent way to add value on a less-than-full-time basis — as it is for true utility players, a member of a 4-man, 3-position time share can’t have his starts selected purely for offensive reasons (if someone gets dinged up). Sure, a player with a platoon split might be thrust into service without the platoon advantage, but if a large part of the value he offered was defensive anyway, that just matters a whole lot less. Defense is hard to gauge for all four of these guys, due in part to limited time and due in part to splitting that limited time between two positions.

2. Even harder is whether or not they would struggle in diminished roles that could see them playing anywhere between 20% and 80% of the time. That’s a human question that I can only barely start to get a handle on. The coaching staff would be much better equipped to answer it, but even then, I suspect it’s not any easy thing to predict. I thought it was the big wild card for Romak ahead of his call up, and it’s probably still his biggest question mark. For what it’s worth, Hill has actually seemed to do well in the role, in particular as a pinch hitter (137 wRC+ this season in 33 PA as a pinch hitter — more PA than Gosselin’s D-backs career).

3. Contract status: the last major consideration, but not the least of them. Romak will be a minor league free agent, very cheap but also not a long term investment. Hill is due $12M next year, but nothing thereafter. Drury will be controlled through at least 2021, at or near the major league minimum for the entire likely D-backs contention window. And if my math is correct, Gosselin can be controlled through 2020, with some (but low) risk to be a Super Two player eligible for arbitration before the 2017 season.

I don’t know about you, but that’s a lot of considerations to keep in my head at once. So although this is anything but scientific, hopefully you find this helpful: 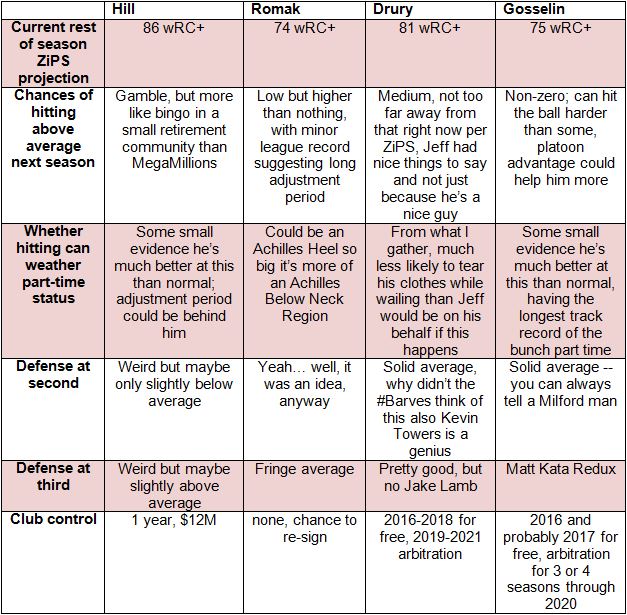 Truth be told, although they’d be redundant, there’d be room for two of these guys on the 2016 roster — especially if one of them or Lamb were also acting as Paul Goldschmidt‘s principal backup at first (and maybe if a catcher were, too). The trick about a 4-man, 3-position time share, though: there’s no extra playing time to go around. It looks to me like playing Drury 70% of the time (or more, in the end, if there’s an injury stretch somewhere) would work. If that’s what happens, the only second role available is as mostly a pinch hitter. Romak would probably take that job in a heartbeat, but although both Hill and Gosselin seem like decent bets as consistent pinch hitters, the D-backs would probably feel obligated to give either of those players at least occasional starts.

Cutting ties with Hill probably won’t save the D-backs more than $500k or so (assuming he catches on somewhere else), but that’s money that would end up going to one of these other guys, anyway. I see the advantage to having Gosselin in the fold for a post-Hill D-backs universe, but in the big picture, I don’t think he’s changed the outlook of this situation. It’s possible that Drury is not at war with these other players, but with Owings or Ahmed — maybe that’s the playing time he’s actually auditioning for. If that’s the case, trying to see if Drury, Gosselin and Hill could all justify spots on the roster next season make sense in September. Otherwise, I’m not sure any of the three of them could move the needle much this month. The safest play also seems like the highest upside play: getting Drury as much 2015 playing time as possible.