The Race for Fifth Starter May Already be Decided Double Plus: The Deferred Money Cycle Begins Again

What Does a Top of the Order Hitter Look Like?

Right off the bat, I should say that this post was clearly spurned by the recent trade that sent five players packing bags and heading to either Arizona or Milwaukee. I’ve never been to Milwaukee, but I get the feeling that I’d rather head to Arizona than Wisconsin in general. Besides, they sell cheese and bad beer everywhere these days. Anyways, it was Dave Stewart’s quote about Jean Segura that lead me here.

“Jean Segura is a guy we can hit at the top of the order if we chose to,” Stewart said. “With the opportunity to make a move like that, we felt we would do it.”

I spent some time the other day discussing Segura in detail – notably his track record and approach. His struggles make him questionable as a top of the lineup hitter, mostly because the leadoff hitter receives the most at-bats of anyone on the team and, presumably, you’d like to give your best hitters the most at-bats. Segura is projected to have the second worst offensive output of any starter on the team. When you think about it like that, like I do, that’s not a guy I’d choose to put up near the top. And it’s been said and bears repeating – Stewart says these things in large part to put a PR spin on the deal. GM-speak is different than scout-speak or manager-speak or analyst-speak or whatever-speak. He’s got a job to do and although I don’t really understand it, part of that job is spinning transactions no matter what. He’s got that part down pat.

But back to the whole top of the order hitter thing: what does that even mean? What does a “top of the order hitter” look like? I started with the obvious: speed. It’s long been known that teams like a guy who can run at the top to “set the table” for the actually good hitters, or “RBI guys.” We know what RBI’s are and aren’t, but speed at the top seems like the sort of pervasive thing that’s widely accepted in the baseball community.

Another attribute that’s likely to come up is contact. No one wants their top of the order guys striking out 28% of the time. That’s a lot of wasted chances and not a lot of table setting. Traditional baseball also covets a player who can control the bat and hit behind the runner from the two-spot if the leadoff guy reaches base. It might be a ground out, but at least it’s a “productive out.” There’s something to that – advancing runners is good. Given Segura’s batted ball distribution, we don’t have to use our imaginations here all that much.

For those of us in the more progressive baseball community, we tend value on-base percentage since getting on base is a really good way to end up scoring. Unless you’re gonna go yard at a prolific rate, it all starts by getting on base. So getting on in front of the team’s good hitters makes a lot of sense. “Get ’em on, get ’em over, get ’em in” only works if you get ’em on to start with. When you have guys like Paul Goldschmidt and David Peralta coming up, you want guys on base ahead of them. That sounds like a good recipe to me.

So I decided to run a little test. You know, head to the numbers. I sampled the National League’s qualified hitters from 2013-2015 and figured out how many runs they scored per plate appearance. I took out runs scored via hitting home runs so as not to over value players who produce a lot of their own runs. Then I correlated the results to Speed Score, Contact Rate and On-Base Percentage. The results were mostly what I expected. 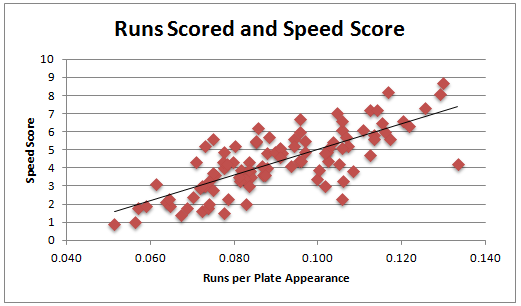 Hey look, the faster the player is, the more runs he scores! It must be really nice to be really fast, right? Well, no, actually. There’s a massive amount of selection bias here. Remember, managers often construct their lineups with fast players at the top of the lineup. Guys at the tops of lineups score a lot of runs in large part because good hitters hit next. The fastest players did score the most runs, but it wasn’t necessarily the case that they scored the most runs because they’re fast. So let’s try elsewhere. 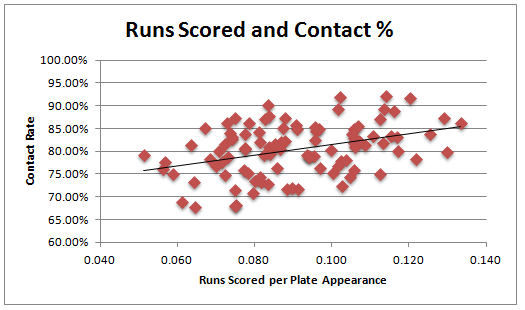 Okay, contact rate shows some effect. The correlation between contact rate and runs scored was .378, which is a relatively strong correlation. This makes sense given that it’s hard to get on base and score runs if you can’t make contact. The more contact you make, the better your odds of reaching base on a ball in play (provided the contact is in the normal range of batted ball velocity).  There may be some bias in here as well as contact guys tend to hit towards the top of the order for reasons we’ve already spoken of, so maybe we have to make a small adjustment here. Still, there’s some effect. 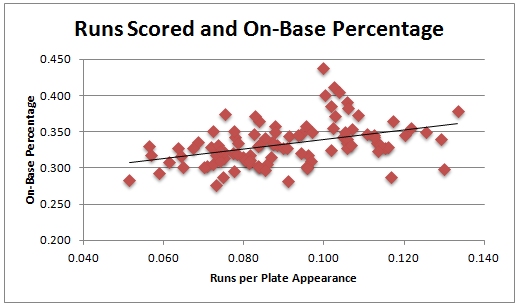 Okay, so we notice right away that on-base percentage has a slightly stronger correlation to runs scored than contact rate did. For the record, the correlation here is .410, stronger than what we just saw above. Again, this makes intuitive sense given that getting on base is a key part of scoring runs. There are teams who have prioritized this at the top of the lineup card. Kevin Youkilis used to bat leadoff, for crying out loud and if there’s one thing we that public took away from “Moneyball” it’s that walks are almost always good (although that was definitely not the point of the book). The selection bias here is surely less prevalent than with contact rate, so we don’t have to make the same adjustment, which likely widens the gap between contact rate and on-base percentage as they relate to runs scored. I’m sure there’s a more advanced way to do this study, but on first glance, it looks like on-base percentage trumps contact rate in this regard.

Ryan did some good work on this topic just last week when he noted that A.J. Pollock should leadoff against lefties and Jake Lamb should lead off against righties. This was before the whole Segura thing but I’m going to go out on a very short limb and suggest that the recent trade doesn’t change the math very much (especially since he had Chris Owings batting 7th or 8th and he and Segura aren’t all that different in terms of skill sets and profiles). With the D-backs’ offense tied to Goldschmidt, Peralta and Welington Castillo (and *knocks on wood with crossed fingers* Yasmany Tomas), getting guys on ahead of what is still not the deepest lineup in the NL can make a world of difference. Squeezing every run out of this group is imperative given the razor-thin margin for error in Arizona this year.

Circling back, Segura does make a lot of contact and he’s a plus runner. He is Trumbonian in terms of getting on base, though (and without the #DINGERZ). Should that put him near the top of the lineup? No, that’s clearly not the place for him. He doesn’t even have a split to utilize against left or right-handed pitching. He’s been balanced and not that effective. Should he hit second just so he can try to push Pollock over once a game? That’s also a “no” because he will often fail to move the runner in that instance and then you’re left with three more relatively paltry plate appearances in front of the heart of the order. I can’t say for sure if Dave Stewart sees this, but I’m guessing someone somewhere (although probably not here) has pointed this out. Until I see a lineup card in April, I’m chalking this up to GM-speak. I hope.

5 Responses to What Does a Top of the Order Hitter Look Like?