Zack Greinke’s Velocity is Trending in a Predictable Direction, Sadly

First we couldn’t wait for pitchers and catchers to report, then position players followed them. Then we couldn’t wait for the Diamondbacks to play their first spring game, and now they’re almost half way through their spring slate. Funny how that happens — the first game of the season is literally in the process of sneaking up on us. Fans are ready for the season to begin, but players likely aren’t quite yet. And while there’s been little in the way of “breaking news” out of D-backs camp this spring, one item’s gotten some attention: Zack Greinke‘s velocity has been a bit troublesome to start the season. It’s not that he’s your typical flamethrower to begin with, but, well, things don’t look particularly good.

Zack Greinke’s getting older and will pitch the entire 2017 season at the age of 33. He’s logged over 2250 innings in his career over a span of 13 seasons. Truth be told, he’s been pretty consistent since his early days in Kansas City, at least until he hit a little snag in Arizona last season. 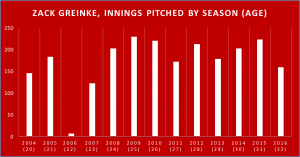 Greinke’s been overwhelmingly durable over the long haul. He lost nearly all of the 2006 season not due to injury, but issues with anxiety and depression. Aside from some normal wear and tear, he’s avoided injury for the most part and only six active pitchers have thrown more innings since 1995.

Given the above information, what you expect from Zack Greinke at this juncture of his career? At 33-years old with a ton of innings pitched, it would stand to reason that he should begin slowing down. Aside from Justin Verlander‘s 2016 resurgence and Cole Hamels‘ dogged determination, most of these pitchers have been in decline in one way or another for some time. Colon is hanging on throwing in the mid to upper 80’s, Sabbathia’s career is dwindling, Lackey is useful but not the pitcher he once was, King Felix is dealing with real issues, and Shields hasn’t been effective for a few years now. It’s not like Zack Greinke’s career is over by any means, but thinking we’ll see him regain his Cy Young form is probably wishful thinking.

This become relevant as Greinke’s velocity this spring has been, shall we say, underwhelming. In an interview with Nick Piecoro of AZCentral, Greinke wasn’t shy about the issue as many have taken notice.

A year ago, Greinke was topping at 93 mph in his second start of the spring. On Wednesday, his fastball was as high as 89.5 mph, according to the Statcast tracking system.

Greinke began his throwing program later this year than he did in previous springs, and he seemed hopeful that was part of the explanation for the dip in velocity. But, at 33, Greinke already has seen his stuff decline from where it was in his 20s, and it would be little surprise if it were it to continue to fall.

Greinke explained that the team gave him the freedom to begin his 2017 throwing program when he felt good and ready. At this stage in his career, one can hardly take exception. Despite late season shoulder troubles, Greinke says he feels fine now and will continue working himself into shape. But this isn’t a one-off thing. Greinke’s velocity has been falling for quite some time, and even if there’s more velocity to come, where he ends up will likely be short of expectations. 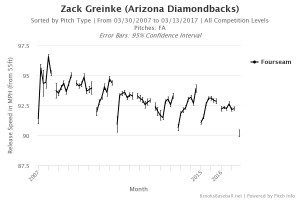 That last bar at the far right denotes Greinke’s latest velocity readings. Early in his career, he was sitting 95-96mph, but last year he as closer to 92mph. This is right in line with what you’d expect from a seasoned veteran with a dozen seasons of work on his arm. But if you’re looking closely, there’s something else of note: Greinke’s arm almost never starts hot as he ramps up over time. Observe his career velocity trends. 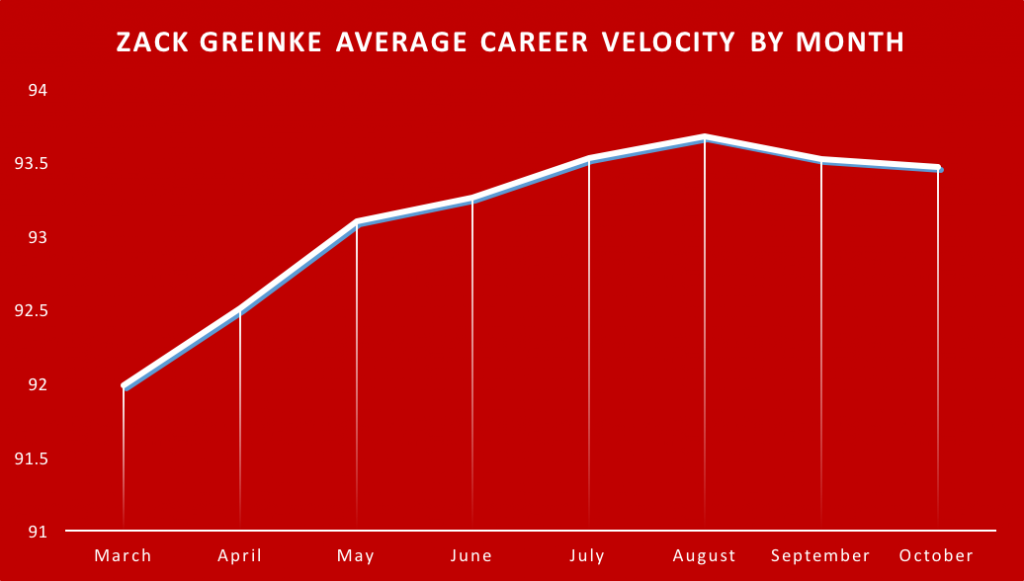 Now, this isn’t to say that Greinke should top 93mph this season — he just touched that mark in 2015 and hasn’t seen it since. But notice that his velocity does steadily trend upward over the summer. This is undeniable from the data. And while we’ll have to adjust our scale for the less-hard, more modern Greinke, gains do seem destined to happen. Rather than look at his career velocity, let’s instead look at his career gains (and losses) from month to month by percentage.

So if we can safely assume that Greinke’s velocity is going to improve over the course of the year, how worried should we be? Is this one of those things where we should expect the ship to right itself, or should be legitimately concerned? To answer these questions, let’s build a very, very simple model. Given that Greinke is admittedly behind in his season preparation and that his March appearances are not over, let’s make a basic assumption. Let’s assume that his final average velocity for March ends up at 90.5mph according to PITCHf/x (it currently sits at 90.1pmh). If the same trends we’ve over the course of his career held steady, here’s where we’d expect Greinke’s velocity to sit in each month of the 2017 season.

Now, I’ll be the first to admit two things:

Last season, the veteran amassed his highest average velocity in June at 92.64mph. The projected peak above is 92.15mph in August, 2017. While that hardly seems like a big loss, keep in mind that Greinke is under contract for five more seasons and these kinds of trends will only continue to pile up. In the last year of his deal, does he sit between 90-91mph at his peak? Given that he’ll be 37-years old at that time, the above trends are potentially scary five years down the road.

And as we discussed in The Offseason Plan and when thinking about trading Yasmany Tomas, the D-backs are going to have a tough time getting away from Greinke’s contract. As Jon Heyman shared last week, the Dodgers were one of many teams that came sniffing around midseason last year to try to pry Greinke away from Arizona. The trouble was, they were only willing to pay Greinke about $25 million per season for him, meaning the D-backs would have had to eat a little over $50 million in salary to move him. While that would have surely been a bitter pill to swallow last year, a diminishing Greinke will only prove harder to move. When velocity is often viewed as a proxy for health and effectiveness, the perception of Zack Greinke is unlikely to rebound in any significant way. While I’ll reiterate here that big velocity is not how Greinke has gone about disposing of hitters in the past, further losses in the velo department won’t help his perceived value, right or wrong.

Zack Greinke’s early spring velocity dip isn’t good — he’s said so himself. But it’s not necessarily a death blow on it’s own, though it does highlight a trend that’s both predictable and going the wrong way. Will that make for a less-effective Zack Greinke? That remains to be seen. It will almost surely lower his value to other clubs as this trend isn’t something that’s gone unnoticed. Maybe he really is a few weeks behind his normal self and we’ve underestimated the gains that will occur. We should probably be hoping for this. How it all winds up is a mystery but one with which the fortunes (both metaphorical and literal) of the Diamondbacks hinge upon.

9 Responses to Zack Greinke’s Velocity is Trending in a Predictable Direction, Sadly